How can I obtain the script to use in After Effects? When I click on the link, it a new window pops up with a page full of code? Please help
Top

How can i download he script file (AE3D EXPORT)? The link does not work.
Top

This is a combination of the other export scripts I've posted lately, along with some new features, into one easy-to-use script.  I've tried to make it as simple and as compatible as I could.  I avoided using recent scripting so that it would still work in AE 6.5 (although unfortunately, the user feedback doesn't work in AE7 or 8 on a Mac...Adobe really needs to fix that.  In some cases the script can take a while and it's good to know it's doing something).

Simply select the layers you want to export and the plug in with spit out a text file that can be read by Maya, 3ds Max, or Lightwave.  It will export any camera, and turn any other AE layer into a null/directory /locator object in the 3D packages. 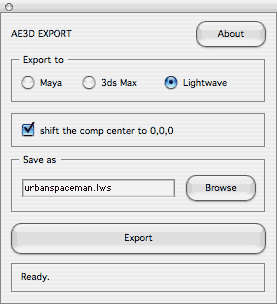 This should work on almost all AE animations, including ones that have parenting, auto-orientation, and even non-uniform scaling.  There are a few rare cases where it won't work, like with negative scale values, or when layers get "sheared" (this happens with a combination of non-uniform scaling, parenting, and rotation, causing rectangles to "lean"...it's best avoided anyway!).

NB. The file for 3ds Max is not a .max scene file, but a script that can be run from within Max.  The other exports are regular scene files.

I haven't had a chance to extensively test this yet, so if you make use of it an it doesn't work, or you come across a bad bug, let me know and I'll do my best to fix it.  Special thanks to Nab who helped me improve on the early versions and suggested how to put them together.

Hi urbanspaceman,
Thank you for posting in this thread, your contribution has give me a suggestion for a work i have done for uni course. thx
Top
Post Reply
79 posts